A downloadable game for Windows

A roguelike game where you wander around a procedurally generated world made up of hexes and fight monsters.

Visit the blog at sverdheim.com!

hey I get this game with the bundle for racial justice and equality and I want to say that it is really fun to play but become a bit boring after an hour of play, I'd like to know if the answers to some questions asked in other comments are still the same : is settlement or leveling up still in development ? I think I'll come back in the game when there will be more than only wandering around and fighting monster :)

PS : I'm really hyped for what this game can be :D

I agree, the game is pretty basic right now. Yes I still plan to continue development. Right now work is pretty busy so I have to focus on that. But it should clear up eventually and I’ll get back to it with updates.

I tried out the game, I really like what is out so far. I can't wait for more updates. <3

Thanks! I really appreciate the compliment!

how do we level up? I am interested in what we gain if we do so.

Leveling up has not yet been implemented.

Characters will then be able to get old and retire, so you will only be able to skill them up so much. I’d like to have it so your characters can also be trainers of younger characters, allowing them to surpass their trainer’s limits. Thus with each generation your party gets better.

But we are a little way away from there. This plan sounds cool to me, but it is also a little unusual. We will see how reasonable it is as we get closer to implementation. Keep your eye on this game, and we will get there eventually!

Go at your own speed, this is your game ^^

Nice game, i'm very curious of did you do the prodedurally generated world in 2D tile sets...

Thanks! Yes, the world is procedurally generated using perlin noise.

Nice job, a little confusing at first but after looking at keybindings i had a great time playing. Keep up the good work

Thanks! I appreciate it! 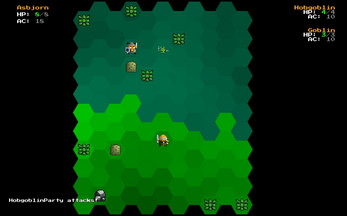 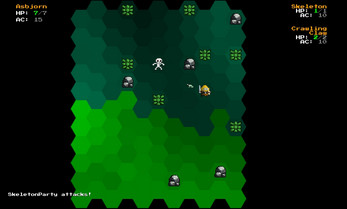